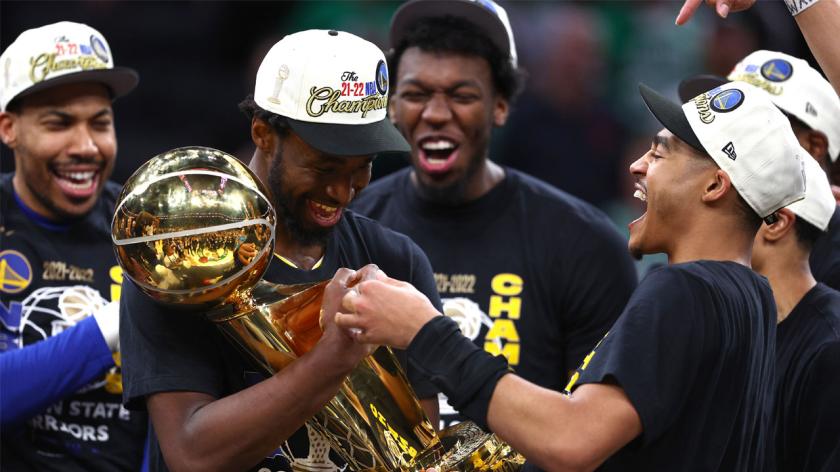 These are just a few ways critics described forward Andrew Wiggins as he navigated the dysfunction within the Timberwolves organization. While the journey has been filled with many valleys, there is no denying that this story ends with the greatest peak achievable as an NBA player.

Let’s briefly recap how dysfunctional Wiggins’ journey began as the Kansas Jayhawk entered the league as the #1 overall pick. Remember, it was the Cleveland Cavaliers who drafted Wiggins 1st overall in the 2014 NBA Draft. Nearly two months later, the Cavaliers traded Wiggins in a package to land forward Kevin Love. At the time, Cavs forward LeBron James wanted to add Love as he began a new tenure in Cleveland and Wiggins became the odd man out.

Wiggins landed in Minnesota and immediately became the face of the franchise, with all the pressures and burdens of an organization who hadn’t won a playoff series since 2004. Wiggins put his head down and went to work, missing just one game in his first three seasons and averaging 23.6 points per game in 2016. Still the T’Wolves were anemic, going 76-170 during his first three seasons.

When Minnesota added star forward Jimmy Butler, the Timberwolves immediately improved as Butler, Wiggins, and star big man Karl-Anthony Towns led the team to a 47-33 record. Instead of building off a successful season, the organization characteristically imploded as Butler demanded a trade shortly before the 2018 training camp.

Not long after, Minnesota cut ties with Wiggins as they traded him, along with two draft picks, to Golden State for D’Angelo Russell. Critics were quick to deem the T’Wolves winners of the trade, labeling Wiggins as a “bust.”

Fast forward to current day, Wiggins has steadily progressed within the Warriors organization. He has developed into a two-way player, appears to have added strength and has much less on his plate than he did in Minnesota.

Wiggins surprised many by not only earning his first All-Star appearance but being announced as an All-Star starter. While many laughed and critiqued, Wiggins worked. Wiggins acclimated to his new role and while he averaged his lowest scoring output since his rookie season, he provided tremendous versatility and energy to the Warriors roster.

Wiggins elevated his game during the playoffs this season, averaging 16.5 points and 7.5 rebounds. During the NBA Finals, Wiggins outperformed Celtics star forward Jayson Tatum. Wiggins averaged 18.3 points per game, 8.1 rebounds, and gave Tatum fits throughout the entire series. In game 5, Wiggins shouldered the load as he dropped in 26 points and 13 rebounds enroute to a 104-94. Golden State took a 3-2 series lead and never looked back.

In Game 6, Wiggins not only scored 18 points but held Tatum to just two points in the second half as Golden State closed out the Celtics on the road. Amidst all the chaos, verbal attacks, character concerns, and losing seasons, Wiggins has been through the ringer and came out on top. No matter how he was described in the past, now only word properly describes him…CHAMPION.