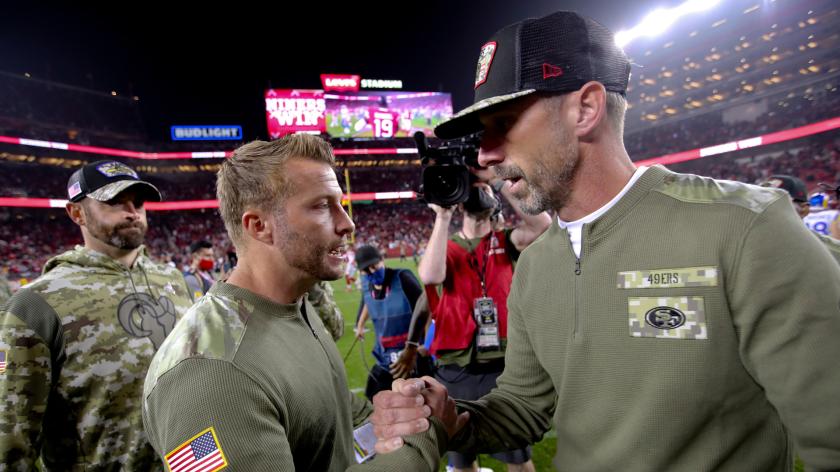 As we saw last Sunday, Sean McVay and the Rams earned a trip to the NFC Championship with a 30-27 victory over Tampa Bay. Although the Rams eliminated Brady and Co., the pressure heightens this week with a matchup against the 49ers.

The Rams are the reigning NFC West champions and swiftly defeated the division-rival Cardinals in the Wild Card round. Still, their upcoming opponent San Francisco have remained quiet amongst the noise and compiled back-to-back road victories.

Surely, we could look at several matchups on the field that will ultimately decide the game:

the Niners ability to run against an ascending Rams rush defense, the limitations of Jimmy Garoppolo, against the strong secondary of LA, or the 49ers pass rush against Matthew Stafford.

However, the key matchup will occur on the sidelines between McVay and 49ers head coach Kyle Shanahan.

McVay and the Rams have racked up multiple 10-win seasons, three division titles, five playoff victories, and one Super Bowl appearance. Even with all this success, a thorn in McVay’s side has been Shanahan.

Shanahan and San Francisco have beaten McVay six consecutive times and holds a 7-3 record against him all-time. In a must-win game during Week 18, the 49ers rallied from a 14-point halftime deficit and defeated LA 30-27 in overtime.

For all McVay’s success at just age 36, his legacy so far will always be capped by the Rams loss in Super Bowl LIII. In the loss, McVay’s offense scored just three points and 260 total yards.

With another shot at reaching the Super Bowl, McVay will have to go through Shanahan. No matter one sided the matchup has been in the past, this Sunday’s game is a legacy game for McVay. With a win, McVay would reach his second Super Bowl in just five years. And if he can do so by beating Shanahan, there will not be any more talk amongst the critics.