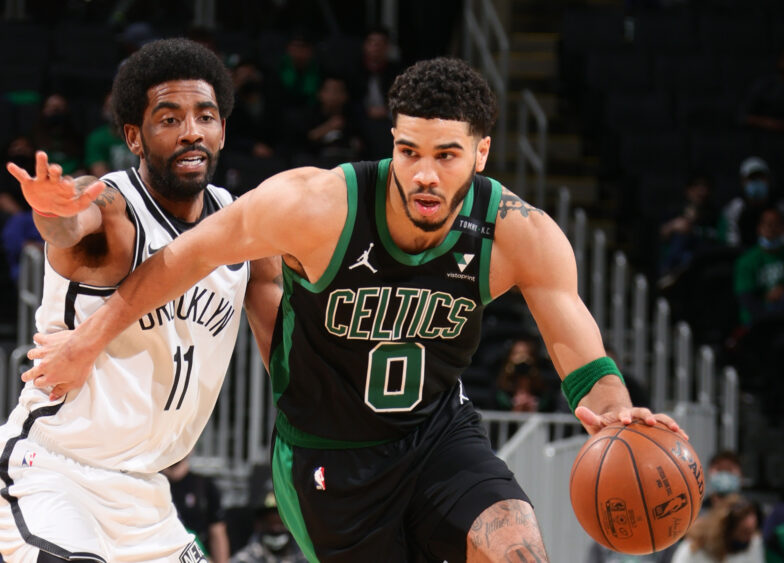 BOSTON, MA – MAY 28: Jayson Tatum #0 of the Boston Celtics drives to the basket against the Brooklyn Nets during Round 1, Game 3 of the 2021 NBA Playoffs on May 28, 2021 at the TD Garden in Boston, Massachusetts. NOTE TO USER: User expressly acknowledges and agrees that, by downloading and or using this photograph, User is consenting to the terms and conditions of the Getty Images License Agreement. Mandatory Copyright Notice: Copyright 2021 NBAE (Photo by Nathaniel S. Butler/NBAE via Getty Images)

The Boston Celtics took care of business on their home floor, as they head to Brooklyn with a 2-0 series lead. The Celtics have been the hottest team in basketball since February, going 26-6 to end the regular season. While first-year head coach Ime Udoka has turned the tide on his rocky start, it has been the emergence of Jayson Tatum that has been the key to Boston’s success.

Tatum has taken the step as a top-10 player in the league, as he has stepped up to star Nets forward Kevin Durant. Tatum is averaging 25 points, nine assists, and five rebounds in the first two games of the series, including making the game-winning layup at the buzzer in Game 1.

We have known for a long time how great Tatum’s scoring ability is, yet on the biggest stage he has shown the versatility to impact the game beyond his offense. Tatum has been one of the few Celtic defenders guarding Durant and his improved defense has given Durant fits so far.

In 10 minutes guarding Durant in Game 2, Tatum limited KD to just four points, no field goal attempts made, and three turnovers according to Chris Forsberg. For the series, Durant is shooting just 30 percent with 12 turnovers. KD’s inefficient trip to Boston came in large part due to Tatum’s defense and Udoka’s defensive gameplan.

With the series headed to Brooklyn, the basketball world understands that KD and Kyrie Irving will not go down without a fight. As we await Durant and Irving’s best performance, the arrival of Tatum may prove too much for Brooklyn to handle.

Brooklyn hasn’t shown the ability to contain Tatum all season, as the 24-year-old forward dropped a season-best 54 points in a victory on March 6th. Tatum’s effectiveness at all three levels has given Boston an offensive mismatch to exploit. When the Celtics need a basket, Tatum has delivered. His playmaking ability has allowed for teammates such as Marcus Smart and Grant Williams to become key offensive contributors.

Tatum will have to shoulder the load as the C’s look to take at least one road victory. As great as the series has started for Boston, their true test begins Saturday in Brooklyn. We all know that Tatum has arrived and is here to stay. Let’s see if he and the Celtics finish the job and advance to the Eastern Conference Semis.