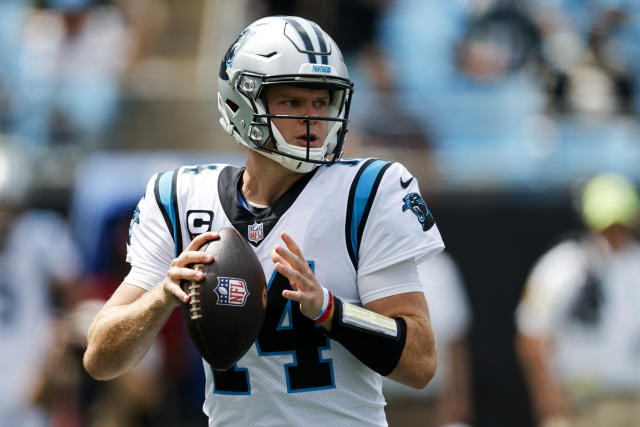 Just two weeks in as the Panthers starter, Darnold appears to be everything the Jets wanted when they drafted him in the top-3. But the difference isn’t Darnold himself. It’s the location and surroundings that have let him thrive in Carolina.

When the Jets drafted Sam Darnold in 2018, the 20-year-old 3rd overall pick has an uphill battle. He suddenly had the weight of a losing franchise on his shoulders. A coach in Adam Gase whose tenure in Miami ended horrifically. An offensive line that was many moons away from the days of Nick Mangold and D’Brickashaw Ferguson.

After three seasons in the Meadowlands and a woeful 13-25 record, the Jets traded Darnold to Carolina for a 2021 sixth round pick as well as two Day 2 picks in 2022.

Unlike the Jets, Carolina has provided Darnold stability with offensive coordinator Joe Brady. Brady is best known for his stellar run at LSU, where he helped Joe Burrow become the #1 overall pick and led the Tigers offense to a national title.

The Panthers have surrounded Darnold with a bevy of high-level skill players and a stout offensive line. Christian McCaffery is arguably the best running back in football and with weapons like DJ Moore and former Jet Robbie Anderson, Darnold has fit like a glove.

Carolina’s offense under Joe Brady has made the game simpler for Darnold and he’s flourished. The Panthers are 2-0 for the first time since 2017. In two games, Darnold has a 68% completion, four total touchdowns, and a 66.3 QBR.

With a Thursday Night showdown with the Texans looming, Darnold and the Panthers look to continue their winning ways with a steady dose of smart, methodical offense paired with a young, hungry defense.

One thing is for sure: all the hate Darnold received during his tenure in New York seemingly should have been shifted to his surroundings; the incompetency of his Adam Gase; his lack of weapons and protection.

Regardless, Darnold is in a better space and is focused on leading his new team back to the playoffs. And the potential that was drafted 3rd overall in 2018 appears to be coming to fruition.