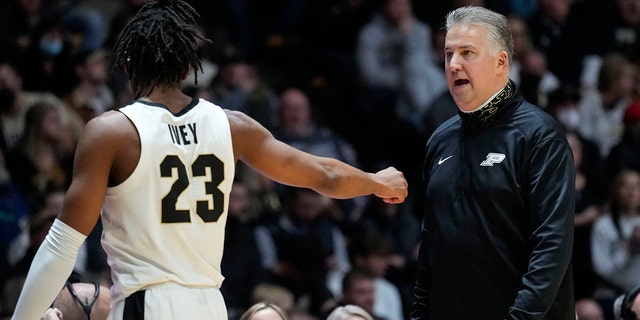 With March Madness less than three weeks away, the collection of dangerous teams with championship aspirations are seemingly endless. With several legit contenders ready to make a splash, let’s look at a loaded squad in the Big Ten.

Before the madness begins, the #4 Purdue Boilermakers have the Big-10 championship on their minds. The Boilermakers (24-4) have dominated the conference this season, posting a 13-4 record with wins against #15 Illinois, #25 Iowa, and Michigan.

After being upset by Rutgers in December, the Boilermakers avenged the loss with an 84-72 victory Sunday.

Purdue has three games remaining before the Big 10 tournament begins, including two tough road games in Michigan State and #13 Wisconsin.

As they did with Rutgers, Purdue will look to avenge an earlier loss to Wisconsin. Wisconsin went on the road and defeated Purdue 74-69, led by star guard Johnny Davis’s 37-point performance.

While Davis is a projected top-10 selection in next year’s draft, Purdue has a top-10 prospect of their own in Jaden Ivey. The 6’4 guard has been a terror for opposing defenses all season, averaging 17.3 points on 46% shooting and 37% shooting from three. In their victory over Rutgers, Ivey poured in 25 points and made 15 free throws.

The Boilermakers have been energized by Ivey, whose athleticism and explosiveness jumps off the screen. With his ability to drive with both hands and aggressiveness, the sky is the limit for Purdue moving forward.

Along with Ivey’s production, Purdue has a lethal center duo in Zach Edey (7’4, 290 pounds) and Trevion Williams (6’10, 255). Edey has been a force for the Boilermakers, averaging 14.5 points, 7.6 rebounds, and 1.2 blocks. Williams has been a consistent presence on both ends of the floor, averaging 12 points and 7.5 rebounds. Both Edey and Williams are projected to be second-round picks in the upcoming draft.

For Purdue, the Big 10 title is in arms reach with an upcoming game against Wisconsin most likely deciding the conference champion. The Boilermakers will have to come up with a plan to stop Johnny Davis but this time around, they will be playing with a chip on their shoulder.

Purdue’s star-studded squad and deep bench give them the edge to win the Big-10 and make legitimate noise in March Madness.