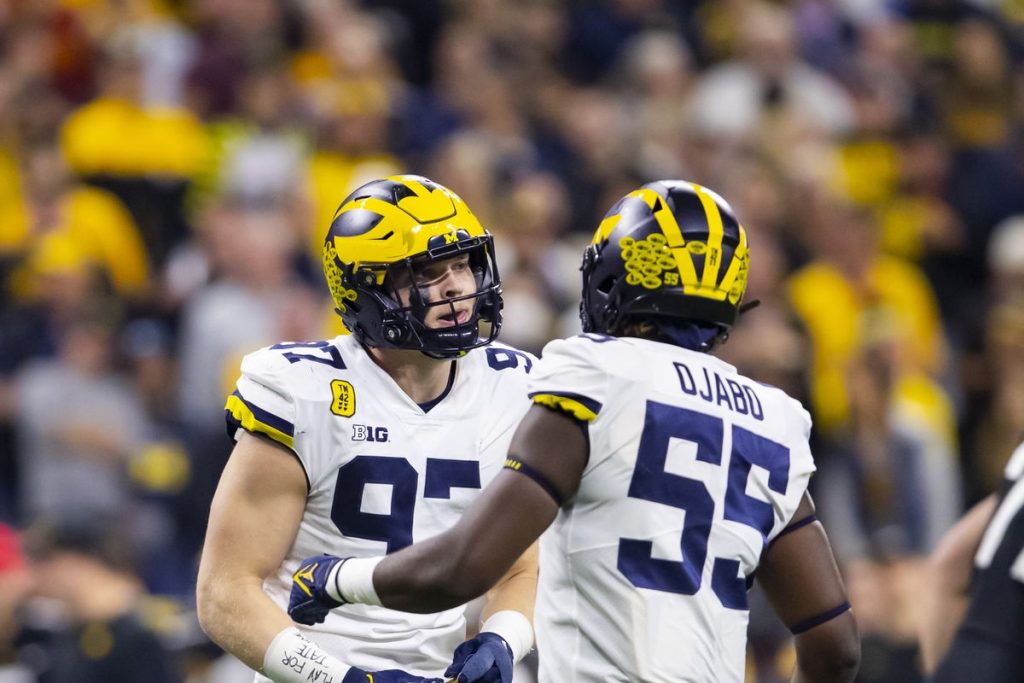 The College Football Playoff is set to kick off Friday afternoon and the talent among all four teams is impressive.

On Friday night, #2 Michigan will take on #3 Georgia in the semifinals. The Big 10 Champion Michigan Wolverines are led by an incredible pass rush and overall pesky defense. Defensive end Aiden Hutchinson has elevated not only his play but also his draft stock. He led the Wolverines with 14 sacks and 15.5 tackles for loss in 2021. Hutchinson is the most disruptive pass rusher in the country and to Michigan’s benefit, they also have fellow edge rusher David Ojabo. Ojabo has played opposite of Hutchinson and flourished, racking up 11 sacks and five forced fumbles.

Both edge rushers present a ton of problems for the Bulldogs offense. Georgia’s team is ready to win yet the question remains which quarterback could lead them to the championship. Quarterback Stetson Bennett has been the team’s starter all season with JT Daniels serving a backup role. However, Bennett’s inability to make big plays down field and produce off-script is a glaring weakness that Michigan should be able to expose.

Georgia’s strength is undoubtedly their defense. Star defensive tackle Jordan Davis (6’6, 340 lbs.) may be the biggest collegiate player to ever lace up a pair of cleats. His disruptive nature and undeniable strength are sure to give any team fits up front. Linebacker Nakobe Dean is an explosive linebacker that can play sideline to sideline. Dean and Davis have led the Bulldogs defense all season and allowed an average of just four yards per play.

Watching Davis and the Bulldog front face off with Michigan’s offensive line will be amazing. Michigan earned the Jim Moore award, which honors the country’s best offensive line. Protected by a solid group, running back Hassan Haskins will have to control the sticks if Michigan wants to upset Georgia. Haskins ran for 1,288 yards this season, averaging nearly five yards per carry and compiling 20 TDs.

Several storylines will be important to note as this game progresses. Will Stetson Bennett make enough plays to keep Georgia on top? Will JT Daniels get an opportunity? Will Michigan be able to run on the Bulldogs? When all is said and done, Michigan’s edge rushers and elite run game should be enough to not only compete but defeat Georgia Friday night.