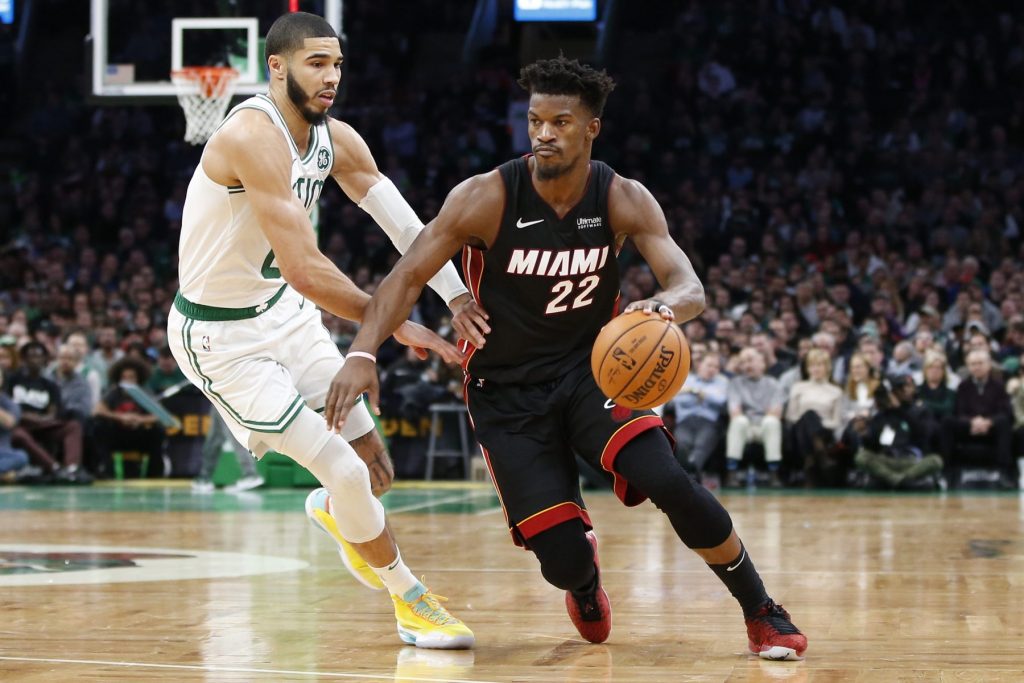 It has been eight years since the Celtics and Heat have met in the Conference Finals and Udonis Haslem is the only player remaining from that iconic series. Instead of the duo of LeBron James and Dwayne Wade, the tandem of Goran Dragic and Jimmy Butler have led the Heat through the first two rounds of the playoffs, with the help of important role players and a deep bench. For Boston, their new “Big Three” of Kemba Walker, Jayson Tatum and Jaylen Brown fought through a gritty seven-game semifinal matchup against the defending champion Raptors to advance to their third conference finals in four years. Eight years later, the two rosters may look very different, but the physicality, rivalry and pursuit for a championship berth still remains.

This conference finals series is a historic one, as it is the first time since seeding began in 1984 that the first and second seeds are not contending to represent the Eastern Conference in the NBA Finals. The mighty Bucks fell flat against the Heat, as Miami was able to limit Giannis Antetokounmpo’s impact and force his role players to carry the load. Toronto stumbled out of the gate and fell into a 2-0 hole against the C’s, but after a buzzer-beater shot by OG Anunoby in Game 3, the Raptors came storming back, eventually falling in a dramatic seventh game. Now the stage is set for two well-rounded squads to battle it out for a chance at a NBA Finals appearance most thought was a year or two away. Here is Austin’s prediction for the ECF’s.

Will Boston’s scorers be able to overcome Miami’s defense?

We all know that the Celtics sports a variety of guards who can put up 20 points, put the ball on the floor, and create their own offense. Led by Jayson Tatum, the Celtics offense has relied heavily on their scorer’s ability to take advantage of one-on-one matchups. Fortunately for Miami, defensive wings such as Jimmy Butler, Jae Crowder, and Andre Igoudala will match up well against Boston’s scorers. Head coach Erik Spoelstra is very familiar with guard Kemba Walker, who played with division foe Charlotte for his first eight seasons in the league. In an evenly matched series such as this one, familiarity will play a huge role.

A meeting of the minds

Erik Spoelstra vs. Brad Stevens. Arguably the best two head coaches in the East will face off for the first time. As great as Stevens has been since joining the Celtics in 2013, Spoelstra is the only coach who has multiple championships. A key to note is which matchups Spoelstra uses defensively to counter the high scoring efforts of Tatum, Walker, and Jaylen Brown. Perhaps he uses Jimmy Butler on Tatum to start and thereafter throwing multiple defensive looks. An underlying theme of this series is bragging rights for the head coach. Both coaches are in the top echelon of coaching, but only one can advance to the Finals.

Will Miami use Boston’s lack of size to their advantage?

A clear weakness of the Heat this season has been their ability to attack the glass. However in the playoffs, Miami has buckled down in the paint. Boston’s big men such as Daniel Theis and Robert Williams should have their hands full with Bam Adebayo. Adebayo is having a breakout season in Year 3, earning his first All-Star nod and All-NBA Second Team in 2020. Will Adebayo use his favorable matchups to his advantage or will he suffer a setback (15 PPG, 48% FG) similar to his series against Indiana?

This series has all the makings of becoming a seven-game set. The coaching is so evenly-matched that both Stevens and Spoelstra should ultimately negate each other. Boston may have the flashier stars, particularly Jayson Tatum. Yet the Heat have more championship pedigree throughout their roster. After Spoelstra, Miami has veteran leadership with Jimmy Butler, as well as championship DNA with Andre Igoudala and Udonis Haslem. If Boston has Gordon Hayward return, my prediction would be altered. But with Hayward’s status up in the air, my prediction is the Heat in 6. The Heat offense is extremely complex, loaded with movement and true marksmen such as Tyler Herro and Duncan Robinson. The Celtics may look to exploit one-one-one matchups against Robinson and Herro, but the Miami defense has been locked in since entering the playoffs. A benefit of Miami’s roster is that on any given night, a different player can lead the way offensively. In the previous series with the number-one seed Bucks, Miami had four players avergae more than 15 points per game, including two starters who averaged roughly 20 points per game (Butler 23.4 PPG, Dragic 19.8 PPG). Boston should have their troubles being able to score consistently and that, ultimately, will end with Miami representing the Eastern Conference in the NBA Finals. — Austin Medina