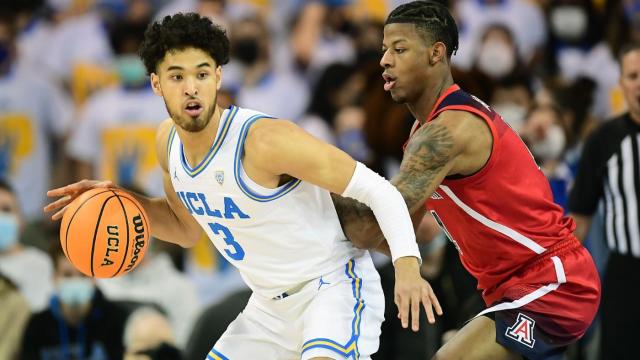 With the Round of 64 kicking off Thursday, March Madness is officially underway. Play-in games have concluded with teams such as Indiana, Wright State, Texas Southern, and Notre Dame punching their tickets to the dance.

With the bracket set, plenty of teams have a claim to the national championship. That said, the three teams from the Pac-12 appear set to make the biggest splash in the next three weeks.

Of course, the Pac-12 champion Arizona Wildcats secured themselves great positioning. The #1 seed in the South, Arizona is led by star guard Bennedict Mathurin. Mathurin has improved his scoring during his sophomore season, averaging 17.4 points on 46% shooting. Mathurin is NBA ready with a filled-out frame and explosiveness off the dribble. Two key players for the Wildcats are center Christian Koloko (7’1, 225 lbs.) and point guard Kerr Kriisa (10.1 ppg, 4.9 apg.)

While the Wildcats (31-3, 18-2 in-conference) have looked dominant for most of the season, there are multiple teams in the conference ready to make a statement. UCLA and USC both received favorable seedings in the tournament.

#4 UCLA’s path runs through the East bracket. The Bruins (25-7) are loaded with guard talent and are a battle-tested bunch. Last season, the Bruins reached the Final Four and ultimately lost to Gonzaga on a Jalen Suggs buzzer beater. Much of the team is back this season and there is no doubt redemption is on their minds.

Guards Johnny Juzang and Jamie Jaquez both remember the feeling from a season ago and will be crucial players for the Bruins. The Bruins are solid on the glass with transfer center Myles Johnson manning the paint. Upperclassmen guards Tyger Campbell and Jules Bernard both can run the offense and both average 82% from the free throw line. UCLA is a veteran ball club and when it comes to March, experience ultimately prevails.

The third and final Pac-12 team in the dance are the USC Trojans. #7 USC has a favorable first-round matchup with the Miami Hurricanes in the Midwest bracket. Although they have teams such as Auburn, LSU, and Wisconsin in their region, the Trojans have an experience advantage unlike most teams. All six players averaging 20 minutes or more for USC are upperclassmen.

The duo of Isaiah Mobley and Boogie Ellis will be tough to stop for opposing defenses. Mobley, a junior forward, has been a force on the glass averaging 8.5 boards per game. Senior guard Drew Peterson has been a marksman for the Trojans, shooting 41% from behind the arc.

Whether it’s the Wildcats, Bruins, or Trojans, don’t be surprised if one of these teams are cutting down the nets in New Orleans.