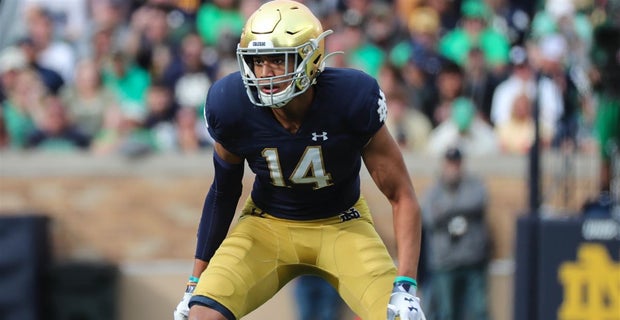 College football returned this weekend and brought a ton of surprises in Week 1. Chip Kelly and UCLA defeated Ed Orgeron and the LSU Tigers. Georgia and a ruthless defensive front held Clemson to just three points. Sam Howell and his Heisman hopes took a big hit in a road loss in Virginia Tech.

While all those surprises shaped the college football world in Week 1, there is one observation that was anything but surprising. Notre Dame safety Kyle Hamilton may be the best player in the country.

Hamilton, 20, is entering his junior season in South Bend and his Week 1 performance showcased just how impactful his play will be for Notre Dame this season.

In Notre Dame’s 41-38 overtime victory over Florida State, Hamilton secured two crucial interceptions that ended up playing a major factor in the win. The Irish defense had very little to be happy about, surrendering 264 rushing yards. Creating turnovers is huge for a struggling defense and Hamilton’s sheer ability will lead to more turnovers through the year.

Hamilton belongs in the Heisman Trophy conversation, as the former 2020 All-American appears to be the best defender in college ball.

The Heisman Trophy traditionally goes to quarterbacks or running backs that lead high-octane offenses. The last time a defender won the Heisman dates all the way back to 1996, when future Hall of Famer Charles Woodson won the honor.

For the Irish, linebacker Manti Teo made a Heisman run in 2012 and ultimately placed second to Johnny Manziel for the award. As for Kyle Hamilton, bring the Heisman back to Notre Dame for the first time since 1987.

The conversation has already started and Hamilton deserves a seat the table.