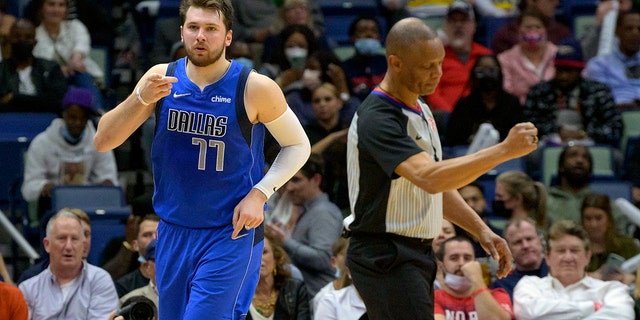 Slowly but surely the Dallas Mavericks have climbed the standings in the Western Conference. The Mavs currently hold the fifth-best record in the West at 35-24. At just 1.5 games behind Utah, Dallas will need to be carried by their star Luka Doncic if they want to secure home-court advantage in the playoffs.

Doncic has been on a tear in February, averaging 36.3 points, 10.6 rebounds, and 9.4 assists. Doncic’s efficiency is a sight to behold, as he has shot 47% from the field and 43% from three-point range in eight games this month.

The Mavericks have won six of their past eight games, including wins over Miami and the 76ers. In Thursday night’s win over New Orleans, Doncic dropped 49 points (7/14 from 3), racked up 15 boards, and dished out eight assists.

“I think I’ve used every noun, adjective to describe his game, and he just gets better when the stage is big,” Mavericks head coach Jason Kidd stated.

No player in Mavericks history ever produced a 45/15/5 game until this month. Doncic’s dominance over the Pelicans was the second time he produced such a statline, the first coming against the Clippers on February 12th. He is the first player since Wilt Chamberlain (1966) to produce multiple 45/15/5 games in a calendar month.

While Doncic’s greatness is understood at just age 22, the fact remains that Dallas will go only as far as Doncic can carry them.

The Mavs roster is filled with three-point specialists and average role players. Of course, guards such as Jalen Brunson and Tim Hardaway can create their own shot and run the offense while Doncic sits. But should we truly rely on these players when the playoffs come around?

The Kristaps Porzingis experiment proved to be huge failure, as they traded the 7’3 big man to Washington for Spencer Dinwiddie and Davis Bertans.

Dallas will have to add a second option to play alongside Doncic in the coming years. Until they do, riding the gravy train on the back of Luka Doncic will be fun and entertaining. But how long can the Mavs organization rely on one superstar and at what cost, long-term?