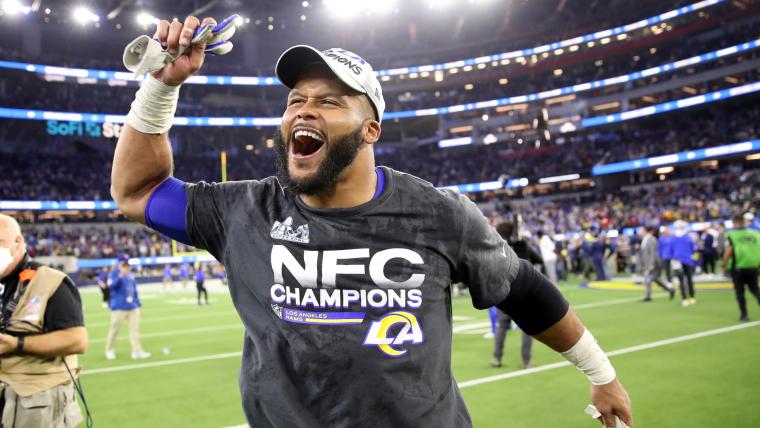 Rams star defensive tackle Aaron Donald has waited roughly three years to get back to the Super Bowl and this time around, he may single-handedly bring a ring to Los Angeles.

To clinch his second NFC Championship, Donald provided the pressure on Jimmy Garoppolo that led to Travin Howard’s game-sealing interception.

While he returns to finish the job this season, the bad taste left in Donald’s mouth after losing Super Bowl LII remains.

Donald and the Rams surrendered just two field goals and a late touchdown run by Sony Michel, who now is Donald’s teammate, in the loss. The Rams defense in 2018 kept New England out of the endzone for most of the game and yet, their efforts came up short. As the Patriots celebrated a 13-3 victory, Donald had to close a chapter that saw him produce his best season as a pro. In 2018, Donald racked up a career-high 20.5 sacks, 25 tackles for loss, and 41 quarterback hits.

Donald has been the best defensive player in the NFL since 2016 and has been on a rampage since his Super Bowl loss in 2018. Donald has won two Defensive Player of the Year awards since the heartbreaking loss, giving him three DPOY awards for his career.

The eight-time All Pro will look to make a bigger impact this Sunday as the Rams face the Bengals in Super Bowl LVI. While Donald tallied just two solo tackles in his first Super Bowl appearance, there’s no denying the impact he has weekly on opponent’s gameplans.

The Bengals have looked impressive this postseason, with a combination of stellar quarterback play and timely defense. Still, the Bengals haven’t faced a defensive front like this all season. Alongside Donald, the Rams have elite pass rushers in Leonard Floyd and former Super Bowl MVP Von Miller.

Cincinnati’s offensive line is their main weakness as quarterback Joe Burrow was sacked a league-high 51 times in the regular season. In their divisional victory over the Titans, Burrow was sacked a horrific nine times. While Burrow and the Bengals found a way to win the game, this Sunday should prove too tall a task.

The Bengals may need to triple team Donald, leaving one-on-one opportunities for Floyd and Miller. For Donald, who has been creating nightmares up front since 2016, it’s business as usual. When the smoke clears and the confetti falls, Donald’s road to redemption may come to fruition. For arguably the greatest defensive player of the century, a Super Bowl ring would be the cherry on top to an incredible career.