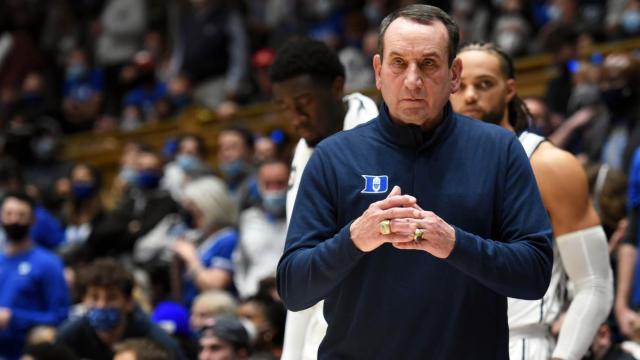 In 42 seasons with the Duke Blue Devils, there isn’t much more for head coach Mike Krzyzewski to accomplish. During his illustrious tenure spanning four decades, Krzyzewski has won five National Championships, 13 ACC Championships, and earned three Naismith Coach of the Year awards.

Krzyzewski, 75, announced in early January his plans to retire after this season. The amount of success achieved at Duke under Coach K is hard to put into words, as he’ll leave the program as the winningest coach in Division 1 men’s basketball history.

In his last season, the #4 Blue Devils haven’t missed a beat. Winners of seven straight games and atop the ACC, Coach K will win his 14th conference title with much bigger goals on the team’s horizon.

Duke will host North Carolina in Cameron Indoor this Saturday to cap off Coach K’s last regular season. The historic matchup between Duke and North Carolina is arguably the greatest rivalry in college basketball. Since Krzyzewski joined Duke in 1980, he and the Blue Devils have a 49-46 record against the Tar Heels. On Saturday, Duke will look to notch Krzyzewski’s 50th head-to-head victory.

With hopes of a sixth national champion, the Blue Devils run will be led by star forward Paolo Banchero. Banchero, a true freshman, has led the way this year averaging 16.9 points and 7.8 rebounds per game. Banchero will have to make his presence felt if Duke wants to survive and advance during March Madness. The projected top-three prospect in the upcoming NBA Draft not only can fill it up, but his playmaking ability and size (6’10, 250 pounds) make it difficult for any team to game plan for.

A player to watch out for during Coach K’s last run is forward A.J. Griffin. Griffin has been scorching from behind the arc, knocking down 48.7% of his shots from distance. His shot making ability isn’t just off the catch-and-shoot, as he is shooting 44.7% on pull-ups off the dribble. Breaking down defense with penetration and shot-making goes a long way this late in the season.

There’s no denying the talent Duke possesses is enough to win it all for Coach K. With another ACC title and the Madness upcoming, Duke appears ready to make a big run and what a storybook ending that would be for the great Mike Krzyzewski.