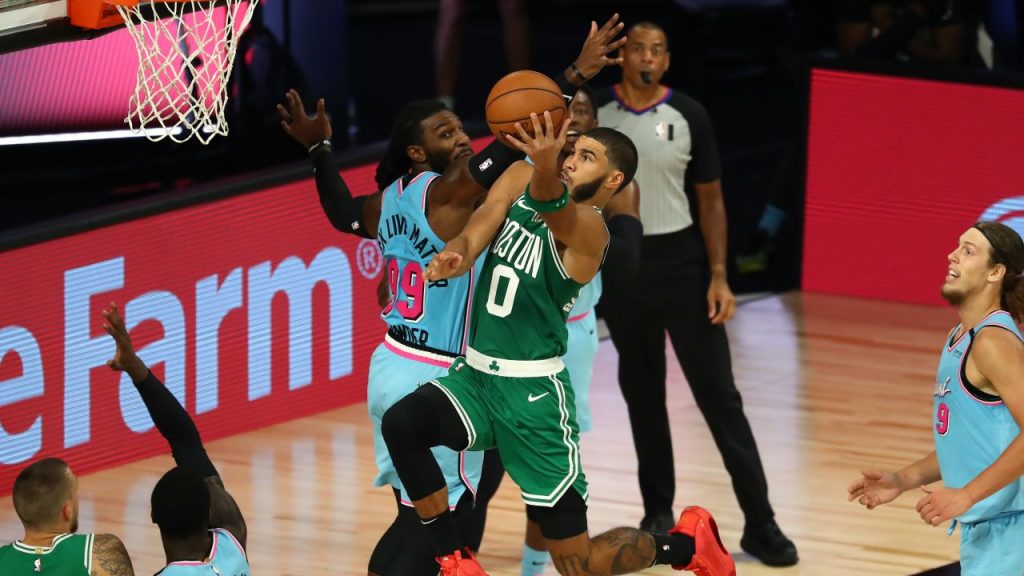 It has been eight years since the Celtics and Heat have met in the Conference Finals and Udonis Haslem is the only player remaining from that iconic series. Instead of the duo of LeBron James and Dwayne Wade, the tandem of Goran Dragic and Jimmy Butler have led the Heat through the first two rounds of the playoffs, with the help of important role players and a deep bench. For Boston, their new “Big Three” of Kemba Walker, Jayson Tatum and Jaylen Brown fought through a gritty seven-game semifinal matchup against the defending champion Raptors to advance to their third conference finals in four years. Eight years later, the two rosters may look very different, but the physicality, rivalry and pursuit for a championship berth still remains.

This conference finals series is a historic one, as it is the first time since seeding began in 1984 that the first and second seeds are not contending to represent the Eastern Conference in the NBA Finals. The mighty Bucks fell flat against the Heat, as Miami was able to limit Giannis Antetokounmpo’s impact and force his role players to carry the load. Toronto stumbled out of the gate and fell into a 2-0 hole against the C’s, but after a buzzer-beater shot by OG Anunoby in Game 3, the Raptors came storming back, eventually falling in a dramatic seventh game. Now the stage is set for two well-rounded squads to battle it out for a chance at a NBA Finals appearance most thought was a year or two away. Here is Stefan’s prediction for the ECF’s.

Before entering into the bubble, Celtics forward Gordon Hayward made it very clear he would leave the confines of the Orlando bubble to be with his wife during the birth of his fourth child. Yet, at the end of Game 1 against the Philadelphia 76ers, he fell awkwardly on his ankle and exited the game. He was diagnosed with a sprained ankle and was given a four week recovery timeline. He completed the mandatory quarantine process upon his return to the bubble, even sitting on the sideline during the Celtics’ Game 7 win over the Raptors. As the Celtics shift their focus to the Heat, the biggest question is the availability of Hayward. “I think he’ll be back at some point in that series, I don’t know when,” said head coach Brad Stevens. The health of Gordon Hayward could be the difference in the series for the Celtics. While the three-headed offensive monster of Kemba, Tatum and Brown is lethal, having Hayward gives Stevens the ability to keep two able scorers on the floor at the same time. This flexibility will allow Boston to find more space in the halfcourt, something they had trouble with against Toronto.

Cool Down for the Heat?

Over the course of the playoffs, the Heat have been lighting it up on the offensive end, particularly behind the three-point line. Jae Crowder has been the Eastern Conference equivalent of Klay Thompson, averaging eight 3’s a game and hitting 40 percent of them in the postseason. As a team, the Heat are hitting 44 percent of their wide-open three-point shots. This has been an upward trend for Miami since February, and their shots have only gotten better since getting to Orlando. Yet, the analytics say these hot streats for the shooters from South Beach will start to go cold very soon. Just ask the Celtics, or more specifically, Marcus Smart. While he averaged 39 percent from three against Toronto, he was nothing close to consistent. The three point shot is going to be a major factor in the outcome of this series, and since Boston is less reliant on the three ball for their offensive success, it may favor them moving forward.

With such talent on both sides in this series, the X-factor may come down to coaching. Brad Stevens and Erik Spoelstra are two of the most well respected coaches in the league, and they are going to have their hands full drawing up schemes to slow the other one down. For the Heat, they faced a Bucks team who did not adjust effectively enough to compete. Yet, Stevens and his squad dealt with the kitchen sink from Nick Nurse and the Raptors. Nurse’s unorthodox box-and-one strategy won’t be a factor in this series, but Stevens has dealt with plenty of tricks to hinder his team’s offensive output, and is ready for anything. The Heat play a much different style of basketball than Toronto, and it benefits the Celtics. They play at a slower pace, and with the reliance on Jimmy Butler’s dominance on offense, he will become very familiar with Marcus Smart’s smothering defense over the next two weeks. Bam Adebayo doesn’t match up well against Jaylen Brown’s speed, who torched him for an average of 28 points in their three regular season games. The additions of veteran Andre Iguodala and Jae Crowder at the deadline solidify a strong bench for Miami, but their shooting streaks are due for a cold spell. One statistic which stands out the most is halfcourt defense, which will determine the trajectory of the series. The Raptors are ranked first in the category, allowing 88.8 points per 100 plays. The Heat, on the other hand, rank 12th at 94.1 points. Miami may be a deeper roster, but the sluggish offense from Kemba Walker and Co. during their last series won’t be a problem this time around. They’ll find the cracks in the Heat defense and exploit it. Celtics in 7, but it’ll be a heck of a series. — Stefan Joyce