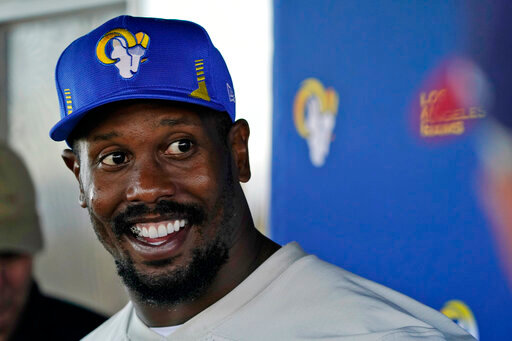 The 7-1 Rams made the move of the trade deadline when they sent two Day 2 picks to Denver in exchange for former Super Bowl MVP Von Miller.

Miller, 32, may have his best days behind him but his addition to this Rams defense should horrify every team in the league.

Injuries have derailed Miller’s production the previous two seasons, yet he racked up 4.5 sacks in just six games this season.

A seven-time All-Pro, Miller’s resume can be listed alongside any active player as he helped lead the Broncos to a Super Bowl victory and eclipsed the 100-sack mark in just eight seasons.

Adding Miller alongside three-time Defensive Player of the Year Aaron Donald, the Rams will have an added level of pressure on the edge. Miller will line up opposite of Leonard Floyd, who has tallied 17 sacks in 24 games since joining the Rams in 2020.

The Rams head into Sunday with a primetime game vs the Titans without Derrick Henry. The game provides the perfect time for the Rams to rush four and get after quarterback Ryan Tannehill.

Los Angeles’ defense has created chaos all season, racking up 25 sacks and flaunting a +6 turnover ratio. With the addition of Miller, the back-seven will have easier opportunities to make instinctual plays and have less time to sit back in coverage.

The Rams have butchered their schedule almost halfway through the season. With Miller’s acquisition, the Rams went from Super Bowl darkhorse to Super Bowl favorites.