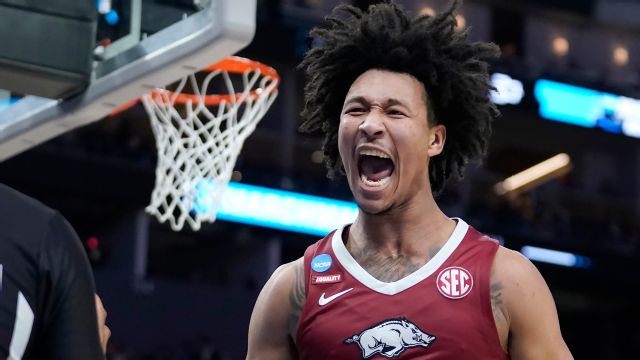 This is what March Madness is all about.

The Arkansas Razorbacks entered the tournament finishing fourth in the SEC conference. They were placed in the West region bracket filled with teams such as Alabama, Texas Tech, Duke, and the top seeded Gonzaga Bulldogs. Now they are just one win away from representing the region in the Final 4.

The Razorbacks defeated the #1 seed Gonzaga Bulldogs 74-68 Thursday night. Arkansas stalled the well-oiled Bulldogs machine with physical, gritty defense. The Razorbacks held Gonzaga to 37.5% shooting from the field and a poor 23.8% from distance.

Arkansas guard Au’Diese Toney was given the difficult challenge of defending Bulldogs guard Andrew Nembhard. Nembhard has been the motor of the Zags’ machine this season and was coming off a 23-point performance against Memphis in the Round of 32. In Thursday’s loss to Arkansas, Nembhard played arguably his worst game all season. Nembhard finished with just seven points (2-11 shooting) and five turnovers, and it was Toney’s defense that paid dividends and ultimately shut down Gonzaga’s offense.

The Razorbacks attacked Gonzaga big man Chet Holmgren, as the 7-foot freshman played in foul trouble all night long. Arkansas’s attacking offense resulted in Holmgren picking up two early fouls in the first half. While the talented freshman provided a nine-point scoring burst to start the second half, he quickly picked up two additional fouls in the process.

Holmgren fouled out with 3:29 left in the game and while the Zags typically possess the top two big men on the floor, the best big in the victory was Razorbacks’ power forward Jaylin Williams. Williams finished with 15 points, 12 rebounds, and knocked down two clutch free throws down the stretch. His versatility to defend both Holmgren and Drew Timme played a huge role in the win as well.

With a date against Duke upcoming, the Razorbacks know they deserve to be here. Now, it’s time to take down another giant.