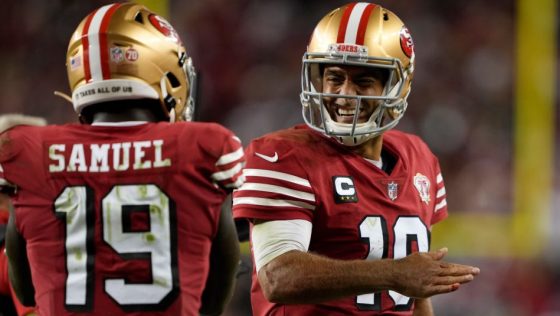 Winners of four of their past five games, the San Francisco 49ers may be the league’s hottest team entering Wild Card Weekend.

The 49ers head into a wild card matchup with the NFC East champion Dallas Cowboys. San Francisco’s latest victory, a 27-24 comeback win over the Rams, is a prime example of why this is no ordinary 6-seed.

Jimmy Garoppolo helped cut a 17-3 halftime deficit and led the Niners to a gritty overtime victory. The 49ers outscored Los Angeles 21-7 in the second half, capped off by Garoppolo’s last minute drive which forced overtime. Garoppolo connected with wide receiver Jauan Jennings on a 14-yard TD pass with just 26 seconds left in regulation. In overtime, the Niners charged down the field and kicked a 24-yard field goal to take the lead and ultimately secure the victory.

Since the merger, Garoppolo has a .760 winning percentage in road games which ranks second all-time in NFL history. (Patrick Mahomes possesses the best road win percentage, winning .788 of such games.)

Garoppolo and the Niners clinched a playoff berth without star left tackle Trent Williams who appears to be ready for their matchup against Dallas. If Williams plays, San Francisco will have three key difference makers on offense that will give the Cowboys defense nightmares.

Along with Williams, the best offensive tackle in the NFL, the Niners offense is sparkplugged by wide receiver Deebo Samuel and tight end George Kittle.

Samuel has done it all for San Francisco all season, racking up 1,770 yards from scrimmage, 14 total touchdowns (8 rushing), and a remarkable 18.2 yards per reception. While Samuel will matchup against cornerback Trevon Diggs, his experience, speed, and versatility will give him an advantage Sunday afternoon.

As for Kittle, his production speaks for itself all while dealing with injuries all season. Kittle has missed 11 games in the past two seasons but when healthy, his impact for the Niners offense is irreplaceable. Kittle racked up 71 catches, 910 yards and six touchdowns this season.

When San Francisco travels to Dallas, they should not be taken lightly. The Niners are as dangerous as any team in the league.